skip to main | skip to sidebar

We scheduled our distribution day to fit with the end of teacher training. As a team we agreed to have Fridays off to serve as a reset button and a way to reorganize and discuss any upcoming events or topics specifically related to OLPC. As such Thursday July 9th served as the end of teacher training and we would distribute the XO’s on the following Monday July 13th.

Sunday July 12, 2009 was the celebration of 34 years of Sao Tome independence, we learned about it Thursday after teacher training, but it didn’t register in our mind that our distribution day would follow a large country wide celebration. We woke up at 7:00 to make sure we were up and running Monday morning at 8am (which was the time we told the headmaster to have the kids there by). We made it to school at 7:45 and set up the rooms for the distribution only to find about 4 janitors and 1 kid there. 8am came around and no one was there so we decided it would be better to delay the distribution until Tuesday. The next day we had expected a few children to show, but we ended up with about 48 children coming in to get the XO’s.

We had composed a contract for the children and parents to sign stating that they would come to trainings and would also agree to not sell the XO’s. Tuesday about 7 parents showed up to sign the contracts, we were eager to see if the children would bring the XO’s back after we had given them full ownership over the summer. We had originally scheduled for XO training to be a 4 week task, the distribution days took somewhat longer than we expected so the training my end up being shorter than we had planned for.

Some of the parents were not able to write their names so we had them write an X…surprisingly one parent had to have their child write what an X looked like. This surprised me and made me think about the prospects of the XO in bringing knowledge to children as well as their parents. This strongly lamented OLPC’s principle of child ownership and made me rethink our proposal. Although we had talked numerous times about the way things should be there is always a better plan under circumstance we could have come up with.

So this blog is just catching everyone up on the events of this weekend and Monday. Friday Judy, Chika, Danielle, Mike and myself all took a taxi to a plantation near the northern tip of the island. This plantation used to be a large cocoa plantation and still produces some today. ( a couple of tons a week) At one point the Portuguese had developed Sao Tome as the primary cocoa exporter in the world. Today it represents a larger percentage of the exports than all others combined. Our taxi driver showed us around the plantation which had one of the largest and best hospital in West Africa. We walked around the hospital complex which was nearly abandoned and stripped of any valuable wiring and flooring. (see photo).

This area was also where the kids played with their home designed racing cars (see photo). There was a slight incline so they would race their cars down the slope. Its really amazing to see what children can come up with when they have limited resources. The plantation factory for drying and producing the cocoa beans was much more modern and engineered than I expected. After visiting the plantation we took our driver and another guy who joined us on the tour for lunch at a local resturant where we had red fish and rice. :)

The night is darkest just before the dawn 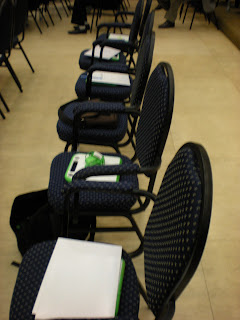 We began the day with a meeting about our goals for the day. We had a discussion the previous night about how we can improve in terms of teaching, because the previous Monday was border line failure. At the first meeting after the Monday we discussed having more meetings. we had previously just went in with a general plan and tried to execute. That worked for the first two days, but when we actually tried teaching use of the XO in the classroom we crashed and burned. The teachers were bored and they didn't understand the overall objective of what we were attempting to teach them.
SO...this morning we met to discuss our goals and objectives. Before our meeting; Chika, Mike, and I we sitting around and I raised the question of measuring progress in the classroom with the XO's. Its one thing to have a new toy to play around with but if you can't measure the benefits how can we expect to sustain this project and the further use of the XO's in this country for that matter. With that being said we laid out some goals for the day and they went exceedingly well.
Mike taught scratch, which in my mind, is one of the most difficult programs on the XO. They seemed to grasp the idea of the program and the functionality pretty fast. We also taught distance today, this program sends out sound frequencies and measures the distance between the two XO's in meters.
I have always expressed some displeasure with the XO's not being effective for the amount they cost (about $180). As I often tell people you can get an Acer or some other netbook for about $200-$250 that performs 10 times better, but OLPC's vision and drive to make the laptops affordable and a useful tool for children drives this program to be much more effective than a store purchased computer.
Tonight is another meeting about tomorrows plan (the server, index, scratch, and moodle).
Posted by Corey at 11:33 AM No comments:

Previously we asked the teachers to come up with some lessons they could teach in class after we have left. Unfortunately, something got lost in translation or they didn't care much to do so, but they came with nothing prepared. Our goal today was to exploit the differences between Western education and African education. My goal was not to change the foundation of their educational system, but rather to make sure these laptops are being used to the greatest advantage.
I have noticed a stark diffrence in the metods of education in Africa (Rwanda, Sao Tome) and America. Teachers and students ask questions of each other with the hopes of either engaging in a debate about the best answer to questions or to find a definitative answer. Here teachers ask nothing more of the students than to recite the answers they have been given previously. This method works when technology is not present, but with the enormus capabilities of the world wide web and the amount of information available a transformation in education needs to take place...even if its as simple as having children answer simple questions or do basic research.
The rest of the day we spent lounging around our house. Chika was appointed Minister of External Affairs so he went to the UN compound to request a meeting with UNICEF to discuss projects on the island that we could participate in. We are waiting on a response.
Chika, Mike, and I went to get haircuts and met Judy and Danielle at the fish market. They were there talking to a woman named Arlene who tried to feed us all the alochol she had. Palm wine, vodka, and Rosema (the national beer). It was closing time at the market, but the people stay there, clean and prepare for the next days work. It smelled there, but I had the opportunity to speak French with a drunk man.
Posted by Corey at 11:13 AM No comments: 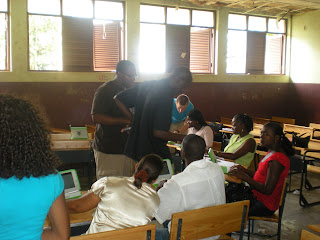 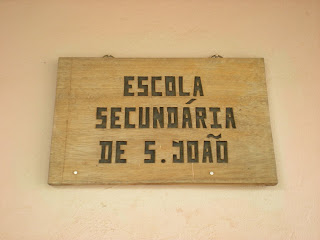 This post serves as a way to play catch up since I have been slacking on updating my blog.
During a meeting with the Minister of Education on Tuesday, he suggested Sau Jauo secondary school. We visited the school the following day and found a eager headmaster although everyone in this country will seem eager to do anything (which scares me because they will never say no, no matter how unfitting the proposal)
Everything is going well so far. The only difficulties we often run into are communication problems. Finding a good translator has proven to be somewhat difficult, but we may have solved that problem with our current translator Abilio. He's eager to expand his English and the team is impressed the his style of translating.
At the beginning of last week we began training the teachers on the XO's. Our translator arrived some 15 minutes late and that sparked all sorts of hatred for Americans and their propensity to only learn English while the rest of the world learns their native language, English, and in some cases a third language.
Once the translator arrived I began the training by explaining out project and our goals. My experience in Kigali had led me to tread lightly in terms of "dictating" what should be done with the XO's in the classroom. Mike brought up a good point we he requested I ask if the teachers even wanted to use the XO's. He made the argument it would represent a significant change to the way they taught and the amount of work they would need to do to prepare for the next days lesson.
(Our plan to distribute the XO was as close to saturation, in my opinion, we could get. Our plan is to distribute the XO's to 6th graders and have the children return the XO at the end of the school year to be distributed to the next 6th grade class. Over the summer the school would keep the XO laptops and re-distribute them in the fall again. There are five 6th grade classes of about 45 so only 2 classes can receive the XOs)
The teachers did want to use the XO, but as with the introduction of any new tech. to a place that doesn't have much experience with it, there is skepticism.
Posted by Corey at 7:14 AM No comments: 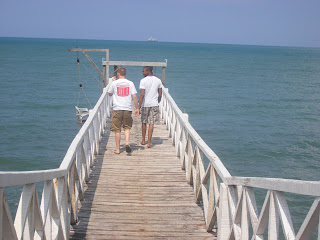 Mike and I at Ned's about to jump/ climb in the ocean.
Posted by Corey at 7:04 AM No comments: 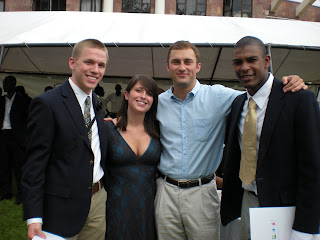 Mike and I with members of the University of Indiana team
Posted by Corey at 6:58 AM 1 comment:

Corey
Chicago, IL, United States
Hi All,I created this blog to document my internship distributing XO laptops this summer in Sao Tome. I am a senior at the University of Illinois Urbana Champaign majoring in INternational Studies and minoring in Informatics. I plan to graduate in Spring 10'